Opening of LG Academy based on DVFU

On December 13, 2019 the LG Electronics company announced expansion of geography of the educational project and, together with Far Eastern Federal University, opens an educational class laboratory, the department of LG Academy founded for carrying out training programs and advanced training of specialists of the climatic industry based on faculty 'Teplogazosnabzheniye and Ventilation'. Read more here.

Leaving from the Russian market of smartphones

On September 9, 2019 it became known of the forthcoming leaving of LG Electronics from the Russian market of smartphones. Deliveries of devices at the company fell since 2017.

According to Kommersant with reference to the report of analytical center GS Group, in the first half of 2019 of LG supplied to the Russian market only 5 thousand smartphones against 80 thousand pieces the previous year. In January-June, 2017 390 thousand tubes were shipped. 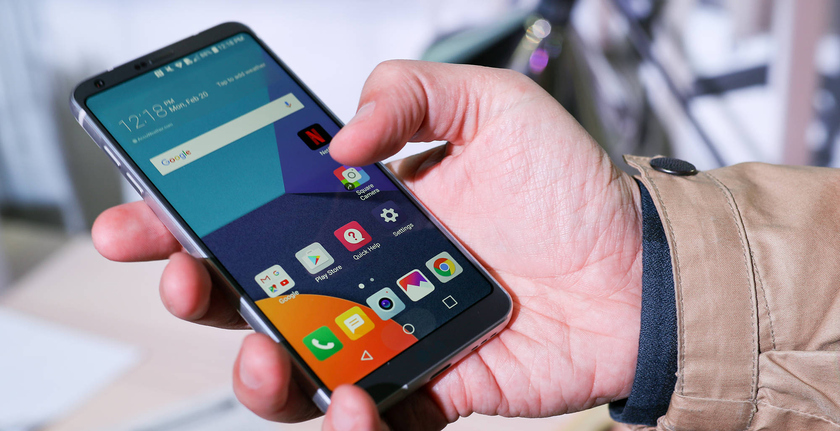 The edition notes that by September, 2019 the LG smartphones are almost not provided in large retail networks of electronics, and on the website of the company only one model is available to the order.

In the M.Video — Eldorado group told the newspaper that LG proactively did not leave long ago with offers on smartphones. By September 9, 2019 some models are provided to the Russian Federation, and retailers sell a remaining balance, reported in the company.

At this LG still conducts active work in other segments and enters in top-5 the largest brands in the Russian market of home appliances and electronics on sales volume, added to "M.Video — Eldorado".


He specifies that the share of LG in the market of smartphones considerably decreases not only in Russia, but also in other countries, except for South Korea and the USA.

In consciousness of the consumer there was a shift, old brands are forced out long ago by the Chinese producers, the department director "Mobile means of communication" of Marvel Distribution Pavel Vyyukov notes. According to him, the largest growth and the most serious competitive struggle occur in a price segment of 5-10   thousand rubles and 15–20   thousand rubles where positions of the Chinese brands with their huge production resources and potential are strong. [1]

Completion of construction of the production and warehouse body in Ruza for 1.8 billion rubles

In the Ruza city district of the Moscow region the construction of the production and warehouse body in the territory of the LG Electronics plant was completed. On August 23, 2019 TAdviser was reported about it by representatives of LG Electronics. Thus the company continues program implementation of development and optimization of the production located in Moscow area. The area of again built body is 25 thousand sq.m. The project investment cost exceeded 1.8 billion rubles. 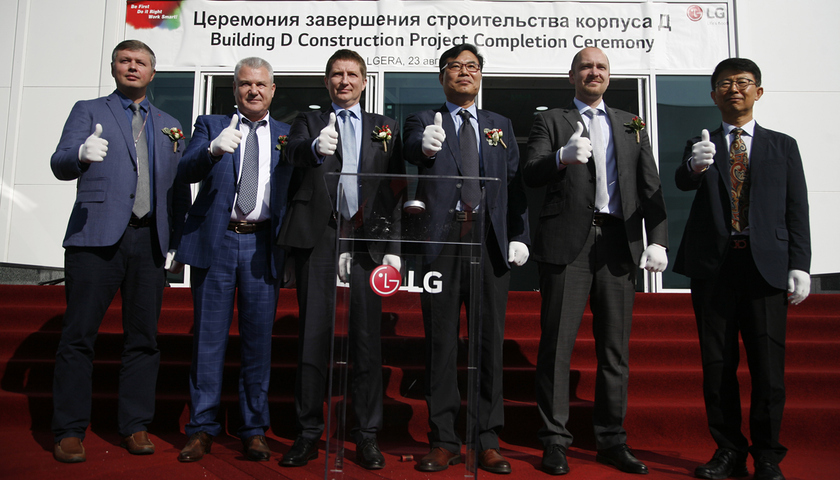 The Deputy Prime Minister of MO Vadim Valerianovich Khromov, the deputy minister of investments and innovations of MO Anton Vladimirovich Loginov, the deputy participated in a ceremony. Heads of administration of the Ruza city district Vladimir Aleksandrovich Shevyakov.

According to LG, the LG plant located in the Ruza city district of the Moscow region as of August, 2019 is one of the largest in Europe on production of home appliances and electronics with total employment at the enterprise more than 1250 people. Products of the plant are supplied to the markets of Russia, neighboring countries and Eastern Europe. Construction of the plant began in April, 2005, and in September, 2006 the complex began to function. The first stone of the production and warehouse body was put in June, 2018, and 1 year and 2 months later its construction is completed.

The enterprise is the main taxpayer of the Ruza district and one of the largest enterprises of the Moscow region. So, the total amount of investments for the period was 2006-2019 $468 million, reported in LG.

Body in which OLED and LCD TVs, refrigerators and washers from available to bonus models are made operate on the territory with a total area of 47 hectares. For August, 2019 the number of the TVs released by the plant already exceeded 25 million copies. And production lines of refrigerators and washers reached to the middle of 2019 of result in 5,968,058 and 11,090,899 units respectively. The strategy of the company on increase in localization of component parts allows to optimize products cost when preserving its high quality according to international standards. By estimates of LG, until the end of 2019 local purchases of materials will reach 21% in TVs, 33% in refrigerators and 57% in washers.

Hi-tech production process at the enterprise in Moscow area is adjusted in full accordance with the international environmental standards of production. For example, the company invested about $10 million in the regenerative and thermal oxidizer (RTO) for cleaning of air from volatile organic compounds which efficiency exceeds 95%. For increase in energy efficiency in office and process buildings of the plant LED and plasma lamps are installed. For reduction of volumes of waste of polyfoam at 10-12 times the screw compactor of RUNI SK 370 is used. Besides, the newly created body is equipped with energy saving lighting systems, zenith lamps and panels of a covering with the increased heat conductivity coefficient that allows to reduce heatlosses.

The plant participates in the actions devoted to power saving, decrease in use of disposable tableware, reduction of a consumption of paper, utilization of the spent cartridges and batteries. The enterprise also assists in suppression of wildfires and works on improvement in the Ruza district. Besides, in the territory of the plant time points of blood donation are equipped.

On April 23, 2019 the customer service of LG Electronics announced the project of express works on priority repairs. Within this project all products on which repair gets to category of priority receive the maximum maintenance from the company: SMS informing engineers on places about purpose of such request, operational deliveries of necessary spare parts and transferring of repairs on similar defects for the closest dates. Earlier the engineer obtained information with the description of a problem, having only logged into the system or having phoned to the client, now, as soon as the operator appoints the similar request for service, SMS with the description of a problem, category and model of the equipment and also a contact information of the client leaves directly to the engineer. Thus, engineers can configure the schedule and visit the client with priority repair among the first.


The customer service of LG works more than 20 years at the Russian market and is provided as own corporate center in Moscow, and wide network (St. Petersburg, Minsk and Chisinau) and the authorized centers – 256 cities of Russia, Belarus and Moldova. LG offered the clients service by the principle of Face-to-face – "face to face": products are under repair from 15 to 60 min., the client has an opportunity to see all process of repair, and the master in turn can listen to responses and wishes. Undoubted convenience is also the SMS notification about the status of the carried-out works and also own spare parts depot. For increase in efficiency of customer service of LG the corporate mobile teams provided in all regions of Russia and also in the republics Belarus and Moldova were organized. Masters perform all possible and necessary works at home on repair not only of refrigerators and the washer, but also TVs, conditioners, and even small household appliances - vacuum cleaners, microwave ovens and audio-video.

For the purpose of service quality improvement, the LG Electronics company also on a regular basis provides technology and communication trainings for personnel, monitors activity of the service centers and controls their work.

Opening of LG Academy in SPBGASU

On February 15, 2019 the LG Electronics company announced the beginning of long-term cooperation with the St. Petersburg State architectural and construction university and opens department of LG Academy, based for carrying out training programs and advanced training of specialists of the climatic industry, based on Teplogazosnabzheniye and Ventilation department (TGV). Classes will be given by leading specialists of LG and teachers of department. Read more here.

2018: Recognition guilty of coordination of the prices

On February 26, 2018 the Federal Antimonopoly Service (FAS) of Russia stated that it recognizes the Russian division of LG Electronics — "By LG Electronics Rus" — guilty of coordination of the prices of smartphones. The company is threatened by a penalty at the rate to 5 million rubles.

According to the message of FAS, coordination actions "LG Electronics Rus" included establishment of the recommended retail prices which were published on the Russian website of LG and were brought to the attention of resellers. 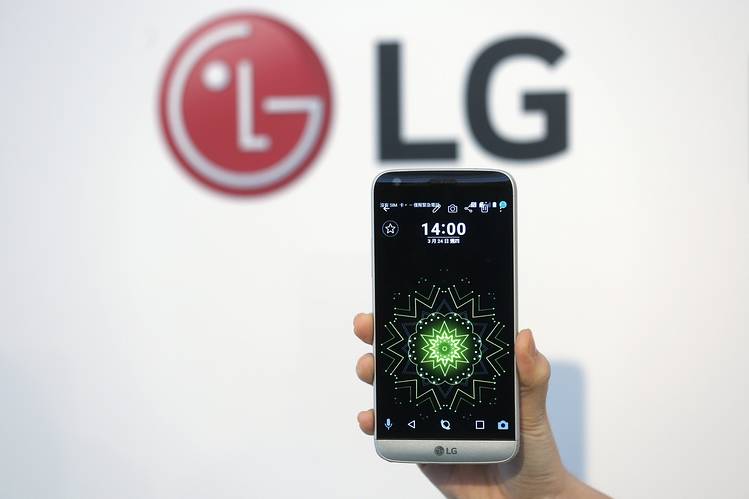 Besides, the company controlled the prices at sellers, put upon them pressure for the purpose of observance of the recommended retail prices and applied to partners of the sanction in the form of the termination of deliveries if those refused to set cost on products, not corresponding required by vendor.

According to antimonopoly service, "LG Electronics Rus" used the special program to investigate the prices of retailers and thus to control the prices of the LG smartphones.  The company regularly received reports on the prices from retail partners who also used so-called "price robots" for the purpose of control of the prices.

The FAS Russia was recognized by "LG Electronics of RUS" of Article 11 of the law "About Protection of the Competition" (illegal coordination of economic activity) which broke Part 5. Within consideration of an administrative case the penalty which size, according to the Russian legislation, is from 1 to 5 million rubles will be imposed on the company.

FAS initiated proceedings against Russian "subsidiary" of LG in June, 2017 after received complaints to price policy on smartphones of the South Korean producer. In January of the 2018th the regulator revealed signs of illegal coordination of economic activity in actions of the company.

Then in January FAS initiated proceedings about administrative offense against DNS company which is also a person involved in investigation of illegal activity of LG.[2]

In September, 2009 to Association of software makers of BSA anonymous reporting that in the Russian representative office of LG the non-licensed software is used arrived.

After verification of this message regarding its reliability, lawyers of BSA sent to the company to LG the precautionary letter informing on responsibility for use of non-licensed products and also with a request to confirm license use of programs of BSA participating companies.

The LG company ignored the address and warning of association then lawyers of BSA addressed to law enforcement agencies of the Russian Federation. On November 30, 2009 within the investigation and search operations held by the staff of ESD of the Ministry of Internal Affairs of the Russian Federation at the Moscow office of LG company on 60 personal computers the non-licensed software, copyright of which belongs to BSA participating companies, was revealed, it was said in the official statement BSA.

In February, 2010 proceedings were initiated. In September, after completion of examination of the detected software, information on it became public. Then the press service of LG reported to Marker that all software used in the company is license, and representatives of corporation "completely cooperate with inspection bodies".

In May, 2011 the Association of software makers took Arbitration court of the city of Moscow with the statement of claim about collecting from the Russian representative office of LG of compensation for copyright violation on the software.

In October, 2011 it became known that the Arbitration court of Moscow recognized LG Electronics of RUS and LG Electronics RUS-Marketing companies guilty of illegal use of the computer programs of participants of Association of software makers (BSA). By a court decision two of these firms should pay to owners — Adobe and Corel — compensation in 3.8 million rubles.

By a court decision two companies should pay Adobe and Corel totally to 3.8 million rubles of compensation. However, LG can submit the appeal to the Ninth arbitration Court of Appeal.

The amount of a penalty — record for Russia. The previous record belongs to the Rostov branch of furniture company "Mekran" — in 2009 Microsoft, Adobe and Autodesk exacted 3.07 million rubles from this firm.

The world record of compensation makes $5.7 million, reported in BSA. So much one Japanese company on the settlement agreement reached in October, 2011 will have to pay software makers.