Windows Defender Advanced Threat Protection is a cloud service for check of the facts of the attacks to corporate networks and protection recovery.

Microsoft released an antivirus for Linux

The Microsoft corporation released in June the public version of the solution in the field of security of Defender Advanced Threat Protection (ATP) for operating systems based on Linux kernel.

The solution can be used for identification of already perfect attacks to corporate networks and assistance to system administrators in acceptance of response measures. So it, including, helps to liquidate effects when all other levels of protection of network by hackers were overcome.

The first release for Linux supports the command line interface using which it is executed, in particular setup of the mechanism of management of threats and start of scanning of a system regarding the malware.

On November 1, 2019 Microsoft announced availability of Microsoft Threat Experts service to clients of the Microsoft Defender ATP platform. Now all subscribers of the platform will be able to get individual advice of experts of Microsoft on cyber security and access to analytical data on modern threats.

In cases when rapid response to a non-staff situation is required, users in one click will be able to activate service Incident Response (IR) for immediate prevention of the attacks.

Within Microsoft Threat Experts clients will be able to receive:

The combination of individual consultations of experts and the system of notifications about threats do Microsoft Threat Experts by the complete solution for prevention of threats providing the additional level of protection of the organizations.

Despite rebranding, functionality of Windows Defender ATP remains invariable, however, it is possible that in the future the platform will have enhanced capabilities.

On March 1, 2019 Microsoft presented the solution for business information security support. The solution Microsoft Threat Experts will allow the companies to ask directly specialists of Microsoft for the help and examination in this area. 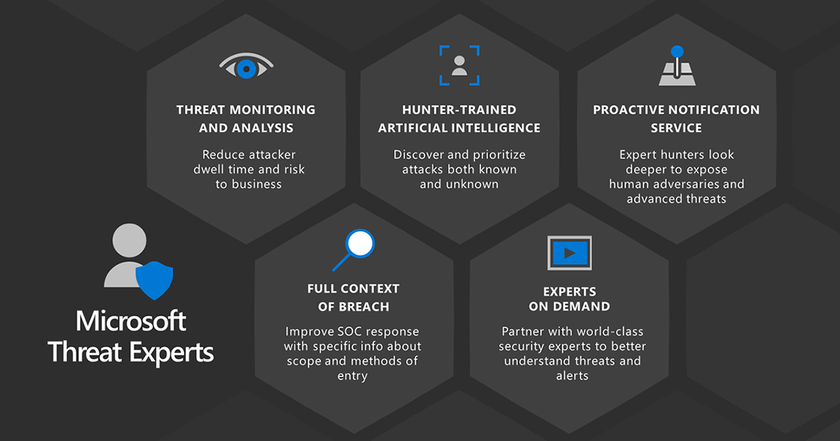 Using Microsoft Threat Experts which appeared in Windows Defender Advanced Threat Protection (ATP), the companies will be able anonymously to send the data to specialists of Microsoft for detection of cyberthreats, including advanced threats, for example, cyber espionage. In case of detection of problems experts send the warning which is individually configured for each company. At emergence of difficulties the staff of the organizations will be able to address directly experts of Microsoft using the Ask a Question to the Expert button. They will also be able to help business to estimate a risk degree and to pick up necessary instruments of protection against malefactors, the last methods of the attacks and harmful campaigns.

On March 1, 2016 Microsoft provided a cloud service of Windows Defender Advanced Threat Protection which, according to the company, can become an incentive for transition of commercial clients to Windows 10. Service works [1] only to Windows 10 Microsoft]. 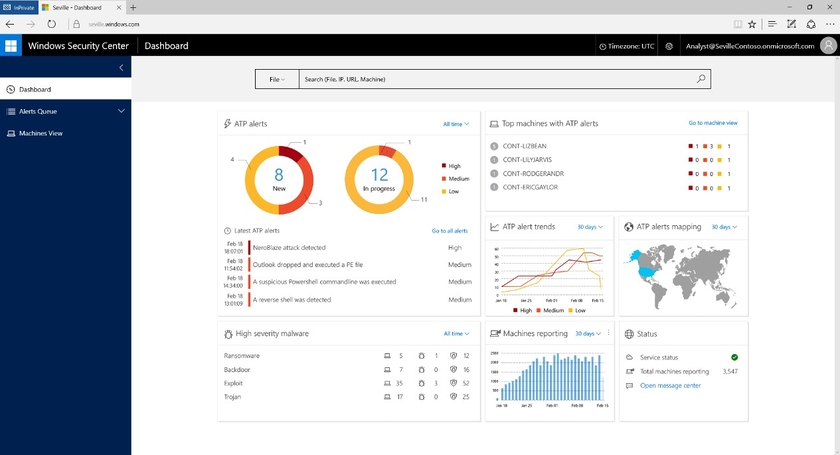 Screenshot of an application window (2016)

The product Windows Defender Advanced Threat Protection ("protection against difficult security risks") is intended for identification of already perfect attacks to corporate networks and assistance to system administrators in acceptance of response measures: it helps to liquidate effects of invasions when all types of protection of network could not hold hackers.

Windows Defender ATP it is capable to detect traces of invasions and to remember them within six last months. He reports:

As a result the service recommends the actions necessary for recovery of protection and mitigation of consequences.

Anonymous information comes to a cloud of Windows Defender ATP from sources:


According to the statement of Microsoft for media, for March 1, 2016 service works in a status of the closed testing for 500 thousand devices running Windows 10. During 2016 the company is going to give an opportunity of participation in testing to the bigger number of the organizations. When in Microsoft did not specify. Date of full-scale start of service is unknown.