2020: Announcement of a system

At the end of June, 2020 Studio of Lebedev announced creation in the company of artificial design intelligence which is capable to perform creative work — to develop unique logos and to create corporate style on their basis. By the time of when the company issued the message about it, a system managed to perform about 20 works on the customer order under the guise of the remote worker.

Studio of Lebedev tells that the project was developed in the conditions of strict privacy by the isolated command. For conspiracy to a system based on AI created own page with a portfolio and gave a human name — Nikolay Ironov. It allowed to avoid leaks and to receive an objective feedback, "not subject to influence of prejudices about generative design", speak in the company. On Ironov's page it is specified that he works in the company since December, 2018.

The image from Ironov's page on the website "Lebedev's Studios"

None of clients knew that the logos received by them were created by machine. Works were accepted by customers and were broadcast on huge audience. The company claims that Ironov's creativity is used on "signs of institutions in the different cities of Russia, many thousands circulations of corporate products and infinite number of rollers on YouTube". 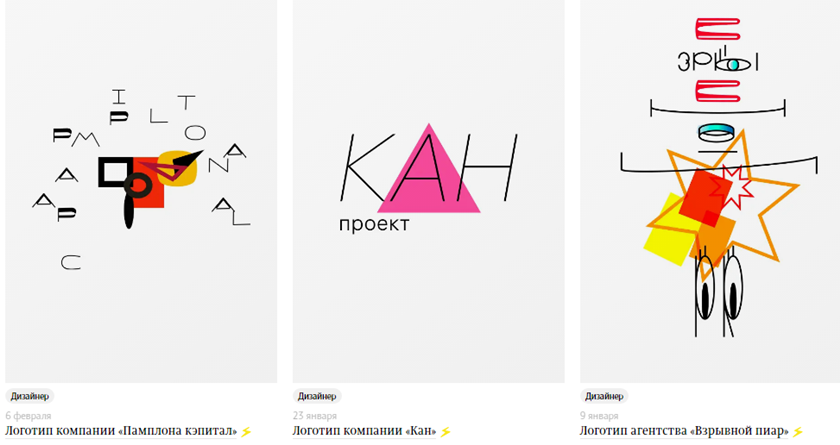 Designers, even the most courageous and progressive, are guided by successful works of colleagues, by jury of the international awards and by own experience, note in Studio of Lebedev. The artificial design intelligence is not guided by anybody. It opens such acceptances which would be thought up never by any person. He is capable to create really new, offering surprisingly daring and unexpected ideas.

Examples of the logos created by Nikolay Ironov. The complete portfolio of works is available on its personal page on the website of studio (artlebedev.ru)

Studio of Lebedev did not answer the questions of TAdviser connected with their system on the basis of AI.

It is necessary to tell that abroad mass commercial automation of creative processes already goes. The corresponding search query shows that the companies from the different countries rendering creative services adopted AI for creation of the corporate style. Some offer it to the customers in the form of an online service not the first year.

One of the most known in this segment is the Canadian company Looka (Logojoy was called earlier), which in 2016 was created by Dawson Whitfield, by that moment more than ten years worked the designer. According to Looka, the company has more than 5 million customers in a segment of small business now.

Having set a number of input parameters for a logo, such as company name, preferable color gamma and some other, it is possible to see the result created by AI, directly on the website Looka, and payment is levied if the user wants to download this work. One file with a logo in the PNG format costs $20.