Influence of a coronavirus of COVID-19 on economy

Main article: Influence of a coronavirus of COVID-19 on economy of the countries of the world 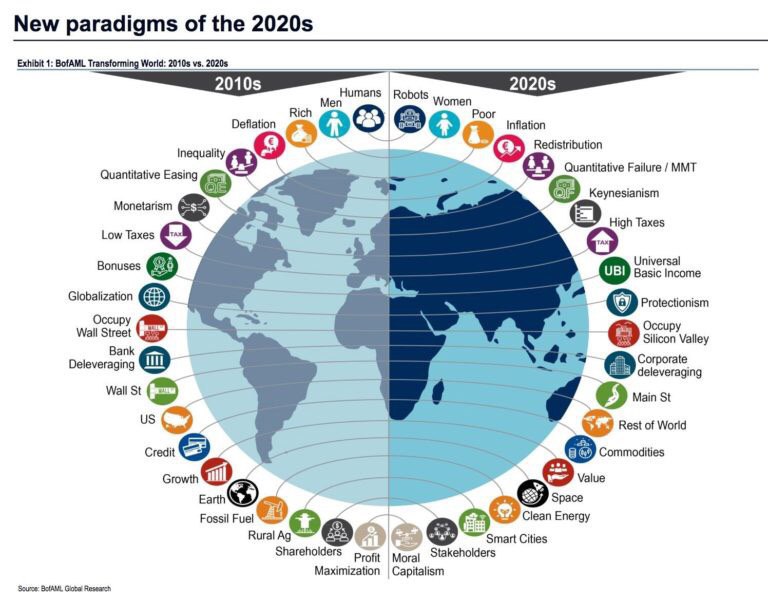 ​​ In 2019 Bank of America made the list of new paradigms which will change the world in the 2020th.

In November, 2019 the world debt, according to the IMF, reached record level of $188 trillion and more than twice overtook the volume of world GDP.

From this amount two thirds – a debt of the private sector. The world did not see it since World War II.

The managing director of the IMF Kristalina Georgieva warns that the new credit boom can threaten economic stability of the world.

188 trillion dollars, are 230 percent of cost of all goods and services on the planet. Besides that unstable the economy is considered already at the debt exceeding 80 percent of GDP. 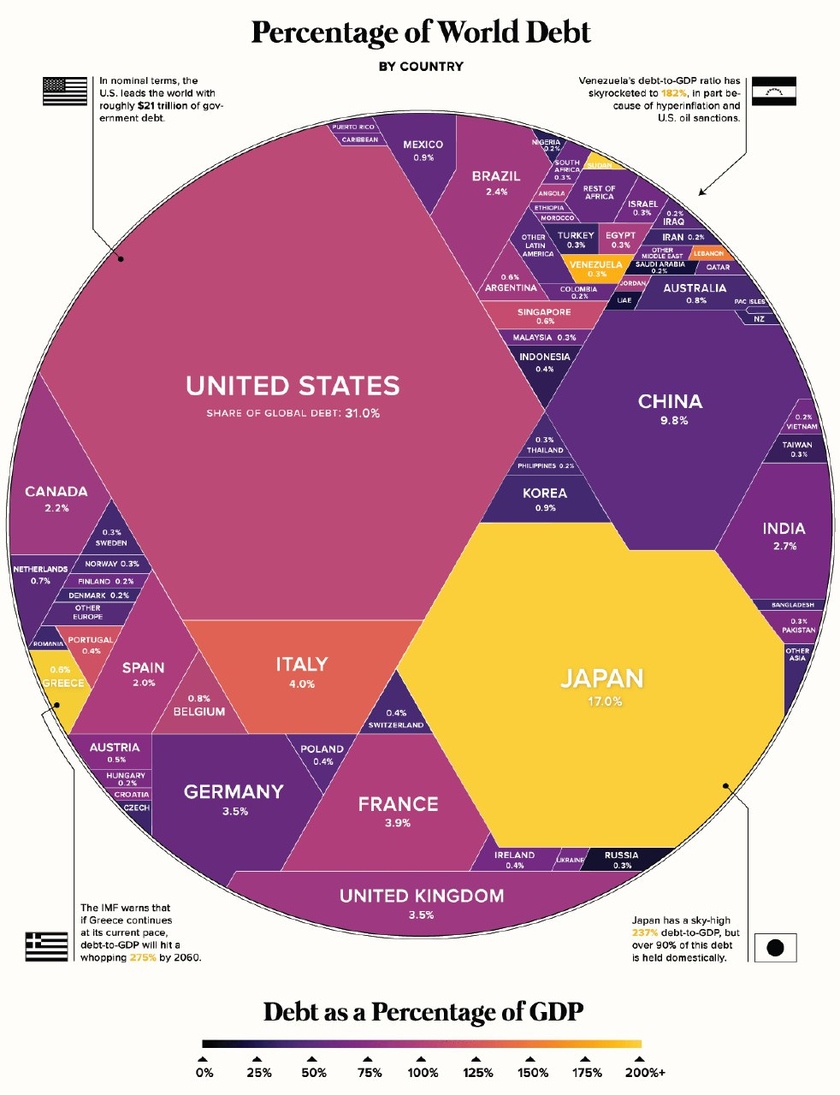 Structure of a world national debt. % of the total amount of each country in 2019. Only 0.3% are the share of Russia. By flowers it is designated the country debt relation to its GDP

By July, 2020 it became known that the total sovereign public debt of all countries in 2020 for the first time for all history will reach 101.5%.

Such forecast contains in the joint article of the chief economist of the IMF Geeta Gopinat and the director of the department of budgetary questions of fund Vitor Gaspar published by the International Monetary Fund (IMF).

For the first time after Great recession of 2009 growth of world GDP in the first quarter 2020, according to forecasts, will be in minus (because of a coronavirus). 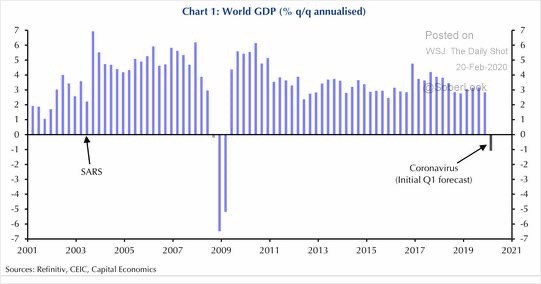 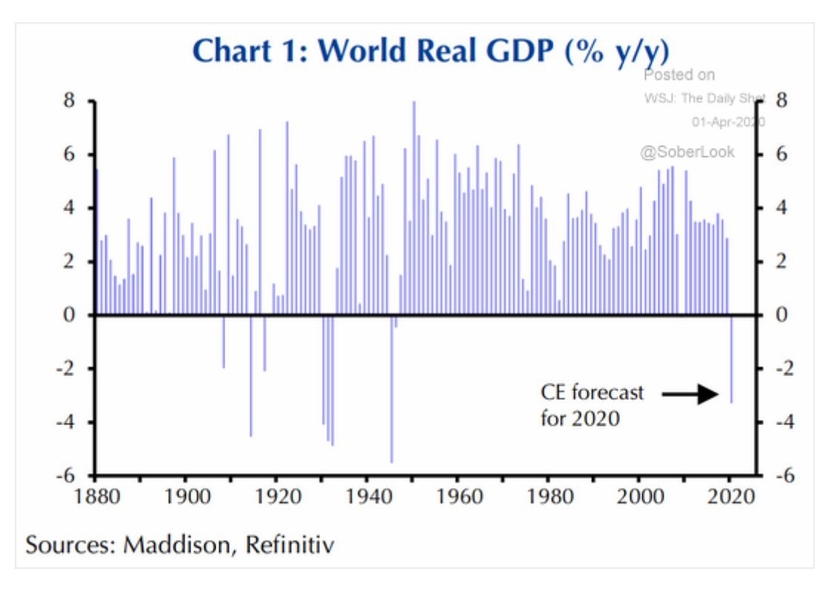 ​​ According to the forecast of Maddison (the beginning of April, 2020), 2020 can become first year of fall of world GDP after World War II. 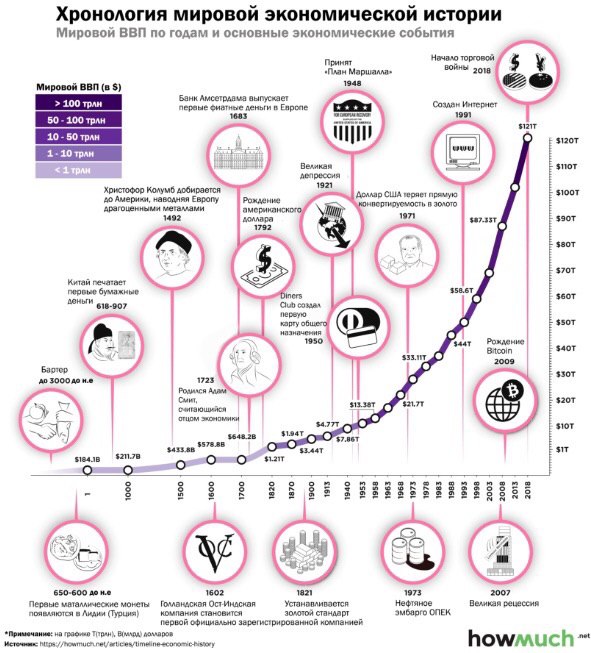 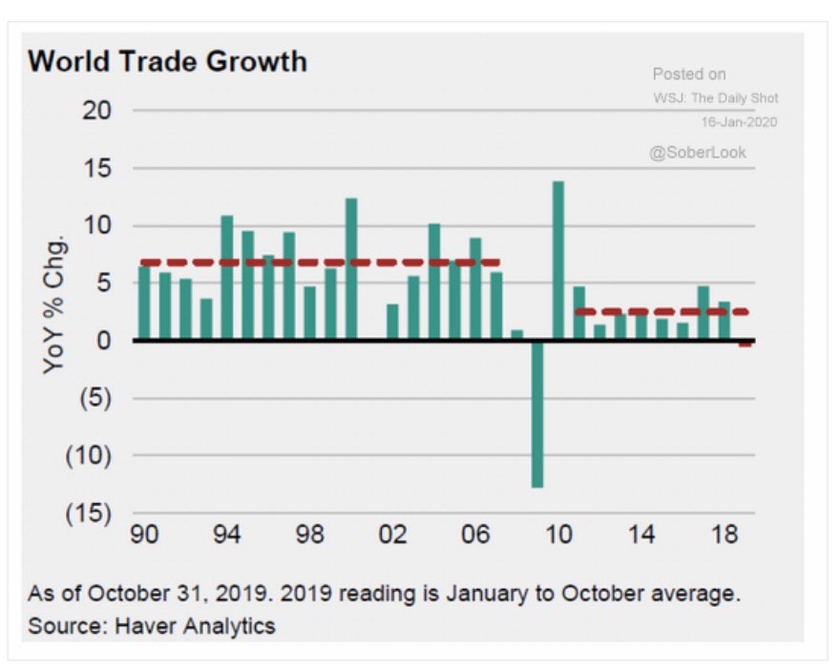 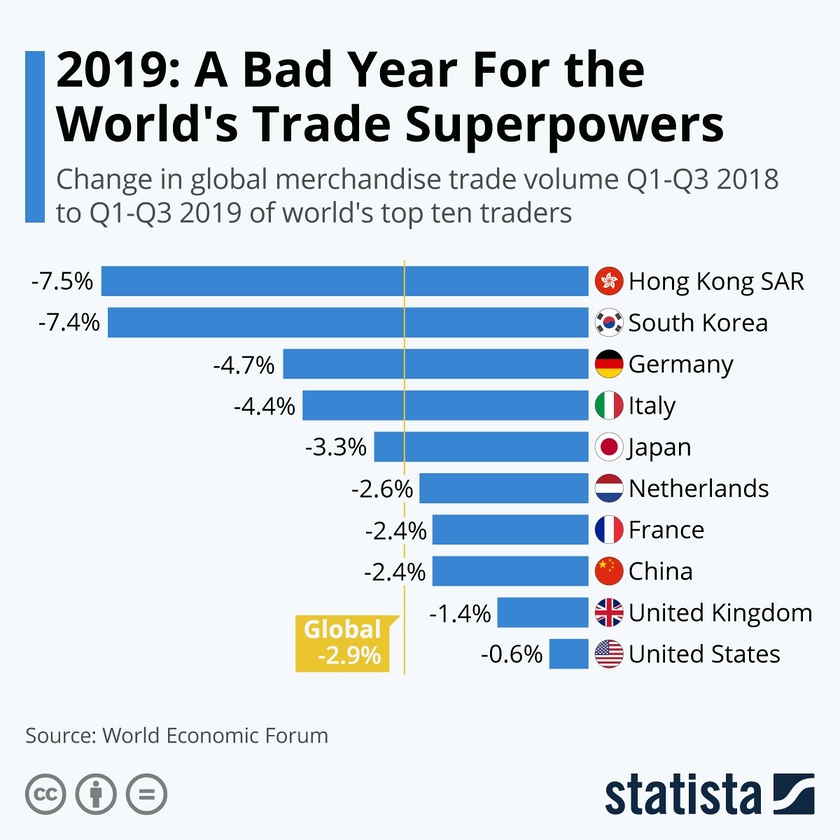 Dynamics of international trade of some countries in 3 quarters 2019.

Negative dynamics of global trade is explained by simultaneous action of a number of factors. 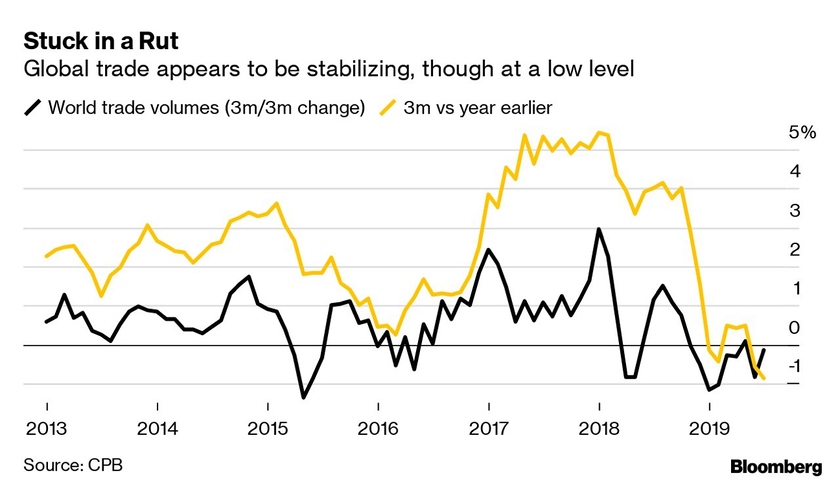 Measures of economic protectionism to which the states resort since 2009 even more often worldwide contribute significantly to decrease in volumes of barter by 2019. 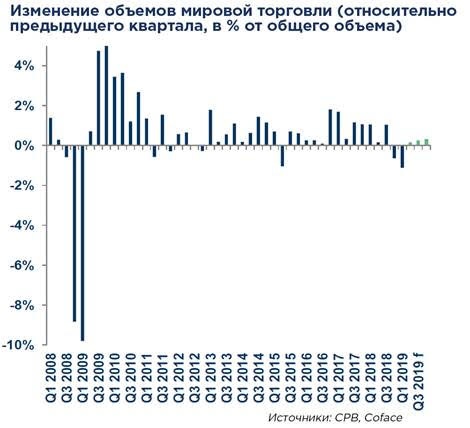 According to Global Trade Alert, in 2017 these or those restrictive measures affected 73% of export of the countries of the G20. At the same time, however, to you it is not necessary and to revaluate influence of protectionism: The IMF in the report in April, 2019 on perspectives of world economy emphasizes that change of volumes of cross-border trade for the last 20 years is explained first of all by different macroeconomic factors whereas import rates play less significant role.

The general cyclic deceleration of growth rates of global GDP also negatively affects trade volume between the states. Among other factors provoking decrease in volumes of world trade it is possible to note a tendency to an economy tertsiarization (growth of a share of the service industry in structure of the markets), the termination of a boom of raw trade and evolution of global chains of value creation.

2018: Main goods of export of the countries of the world 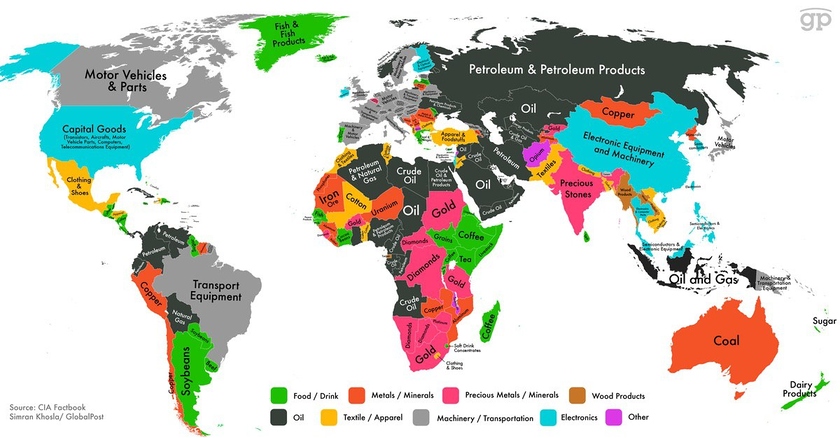 Main goods of export of the countries of the world

2014: Trade between not the rich countries reaches trade level between the rich 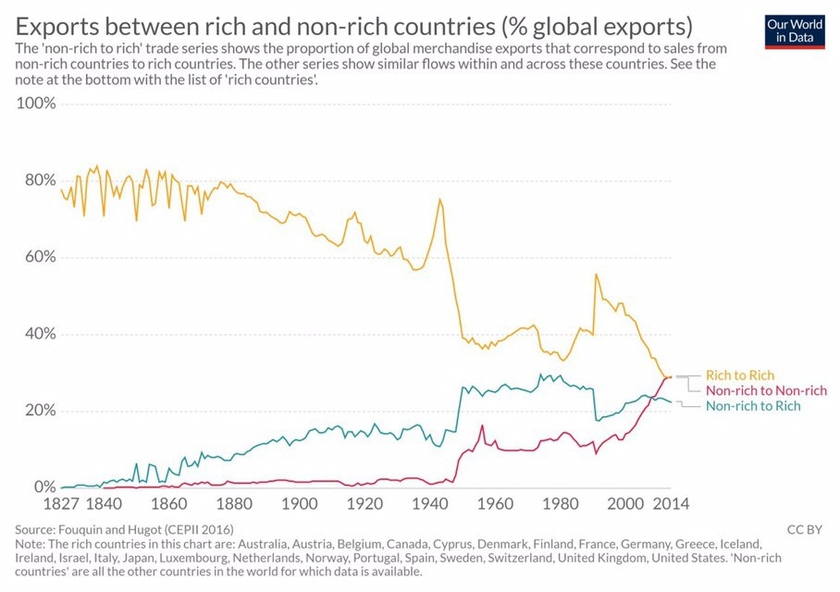 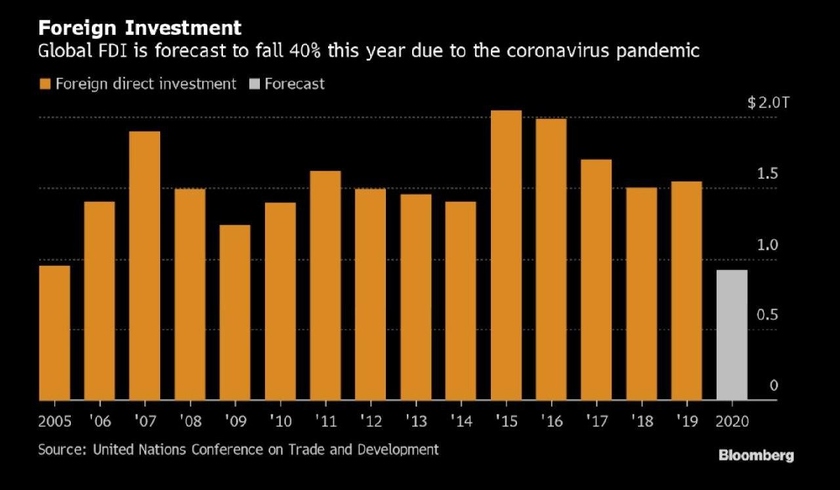 According to forecasts for June, 2020 it is expected that the world direct foreign investments in 2020 will decrease by 40%.

The number of people of working-age, aged from 20 up to 64 years, reached a pica in Europe in 2010. By the beginning of 2020 in this group was almost on 12 million people less, than decade before. 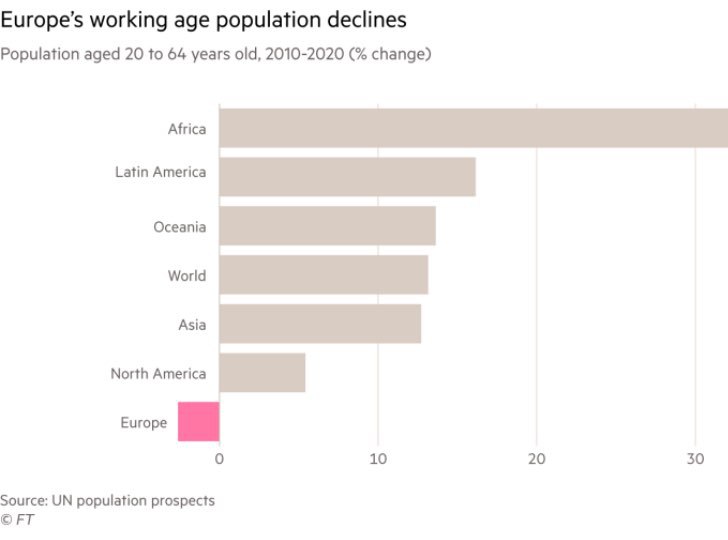 Dynamics of change of quantity of labor power in different regions of the world.

By 2035 in Europe will be about 50 million less than people of working-age, than in 2010.  For the beginning of 2020 Europe is the only region of the world in which reduction of labor power is observed. 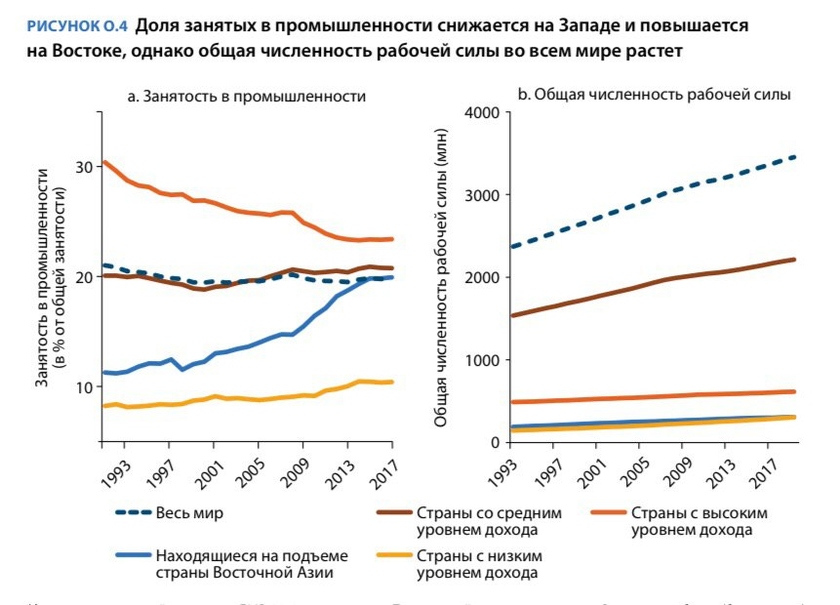 Economies of the countries

The countries on nominal GDP 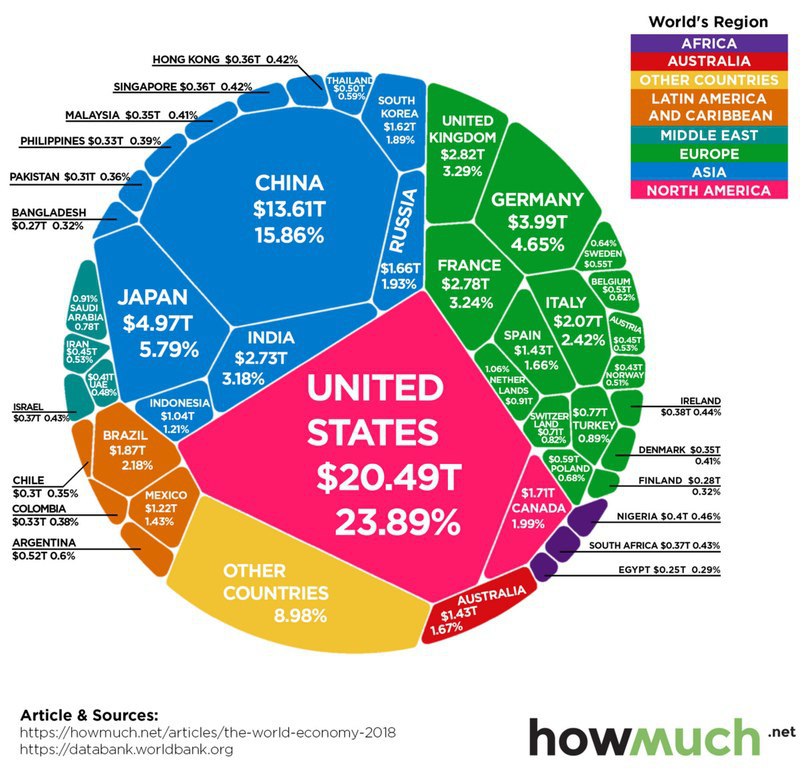 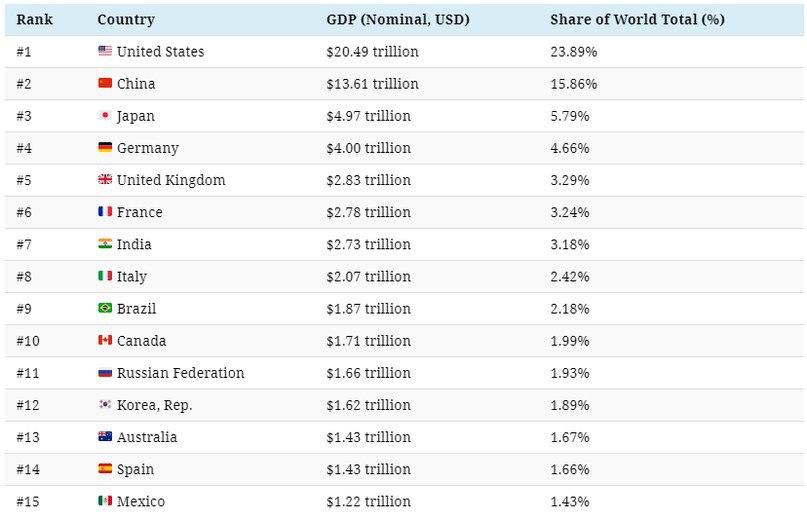 The leading countries by the amount of nominal GDP in 2018 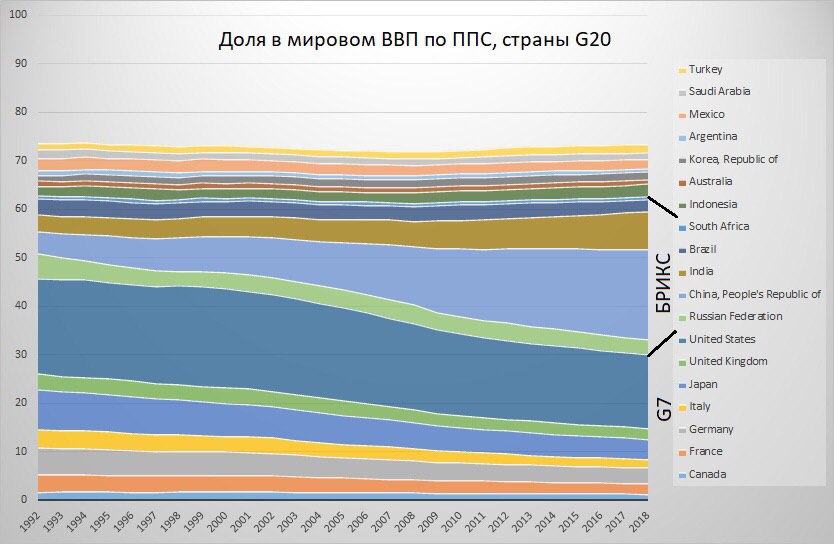 As the weight of the countries of the G20 changes

However all this first of all thanks to China and India. China can already compete not only with other countries, but also with associations of the countries. 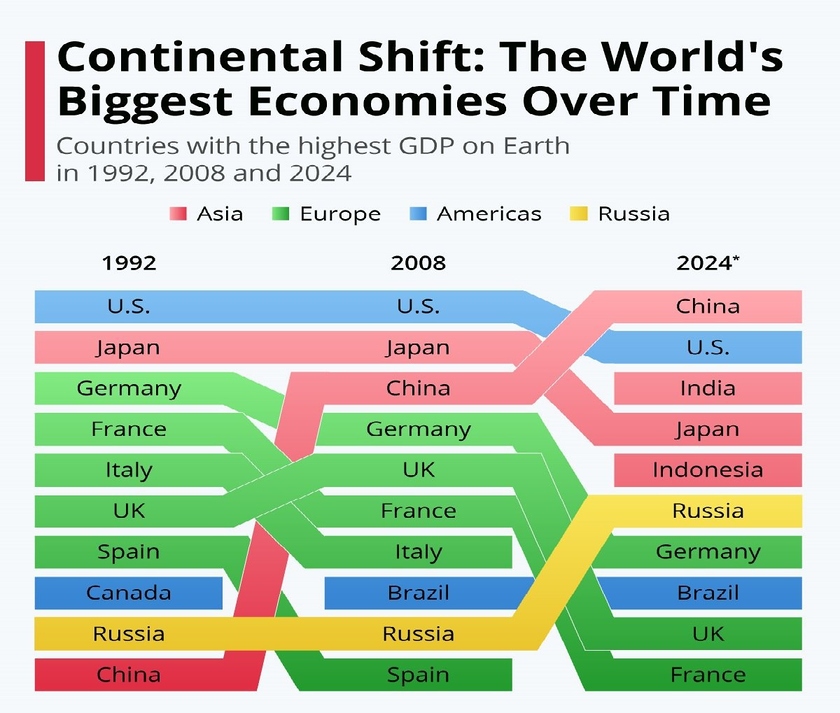 The forecast of the World Bank GDP loudspeakers of the largest economies for July, 2020

2018: Capitalization of the stock markets of the countries of the world 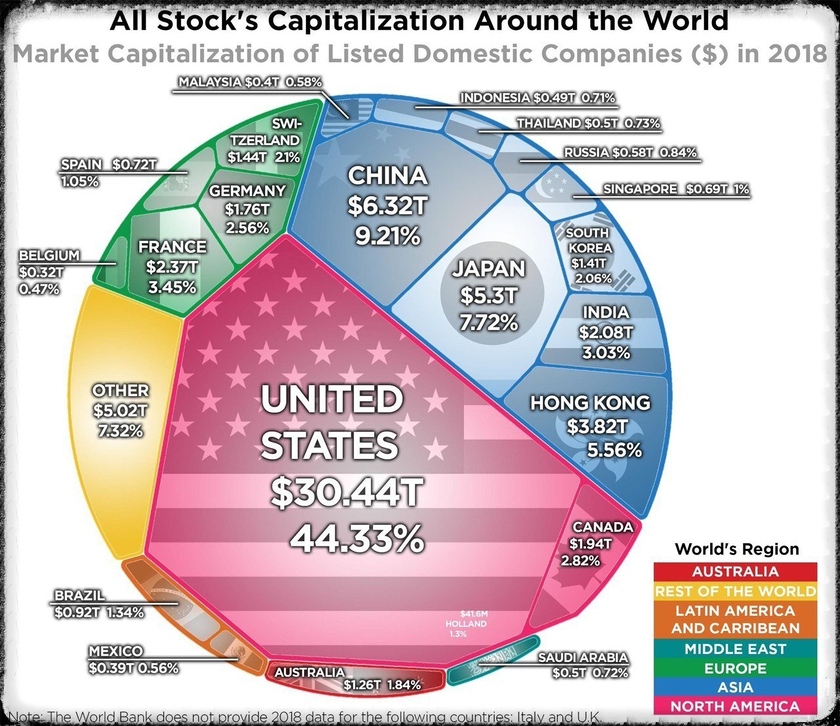 Capitalization of the stock markets of the countries of the world, 2018

Leaders are the North American and Asian region making nearly 70% of a general meaning of capitalization.

The highest capitalization the stock markets of the USA have 30.4 trillion dollars, China 6.32 trillion, Japan 5.3 trillion.

For 2017 institutional investors (the share and pension funds, insurance companies) hold shares of which 41% of market capitalization in the world are the share, follows from the new report of OECD. In the USA 60% of all investments are the share of such structures, they dominate also in the markets of Great Britain and Canada. Authors of a research note that funds generally practice passive investment on the basis of indexes without analysis of the specific companies. It weakens one of key functions of the stock market — evaluating activity of issuers and providing the new companies with the capital which would promote their growth.

In total for the end of 2017 in the world there were 41  thousand publicly traded companies, their total cost was estimated at $ 84 trillion. In the report of OECD data on 10  thousand companies in 54 markets (about 90% of world capitalization) were used. The largest market — American (36% of capitalization), follows it China (12%). Daley — Hong Kong, Japan, South Korea, Great Britain. Russia in this list took the 20th place — between Brazil and Singapore.

The second in value category of investors after institutional are government institutions (14% of capitalization). First of all it is the central and regional governments, then — the sovereign and pension funds, state companies. 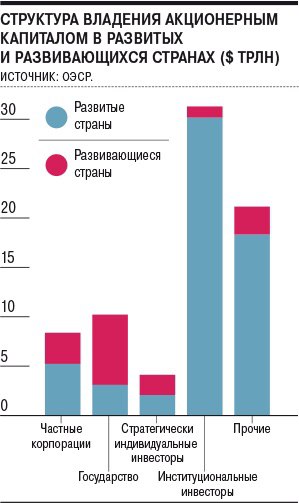 In 8% of all companies placed on the markets not less than a half of shares keep such structures — their total investments make $ 10 trillion. At the same time investments of this sector in China make 57% of the world volume of the capitalization which is in ownership of state structures. The state is an important player and in the markets of Saudi Arabia, Malaysia and Norway — there his share makes from 34% to 46% (in the Russian Federation it is estimated at 32%).

On other large categories of investors — private corporations (including holdings), strategic individual investors (families) — totally have 18% of capitalization.

As far as you are rich in comparison with others

To be richer than a half of the population of Earth for October, 2019, it is enough to have a little more than $7,000 (both financial, and non-financial assets – for example, the real estate enter assessment). 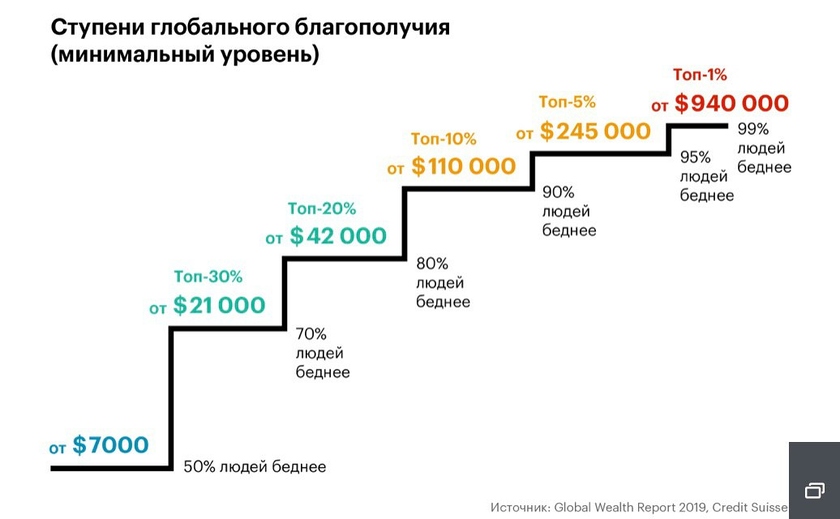