Developments Viola allow an unlimited number of users to move freely in virtual space. ALT: Antilatency tracker represents the small modular device which fastens on a VR helmet or is connected directly through port of the smartphone. ALT differs in the high accuracy and lack of delays as defines provision at the expense of the built-in sensors and the camera which is guided according to special tapes with infrared markers. The created system of tracking is compatible to all VR devices and is suitable both for home use, and for creation of large-scale VR attractions.

A system defines provision at the expense of the built-in inertial sensors and the camera which is guided according to special tapes with infrared markers. In the solution for a corporate segment of a tape with markers can be integrated into a floor covering or are placed on a ceiling. Thus, the system of tracking of Alt company is suitable for home use and creation of attractions of virtual reality and also for industrial application, in particular for development of virtual exercise machines.

The problem of the market of virtual reality is that 95% of users are available only the simplest interaction with the virtual world: rotation by the head without a possibility of physical movement. In the market there is no mass and available solution for full user experience with movement, worth less than $300. This product liquidates the existing gap. 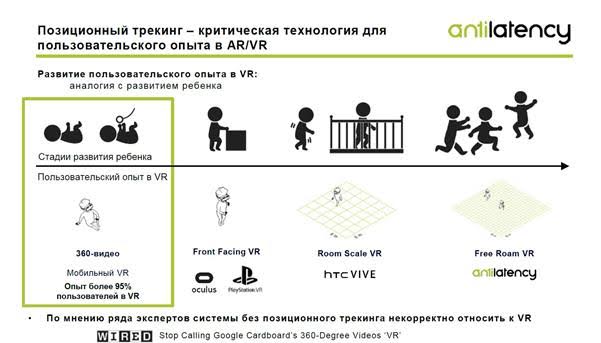 Key feature of this solution is placement of the optiko-inertial tracker on the traced object (the head, the user's hands), and markers are distributed evenly on all area where tracking is necessary. This approach is called inside-out and allows to reduce much the cost of scaling of this solution on big spaces. Expansion of a zone on additional square meter of tracking costs no more than $15, against $500 and above at the closest competitors. This approach, in the long term, will allow to apply this system of tracking to universal tasks in industrial application and robotics.