On January 10, 2016 the Rayf Life company which is based in St. Petersburg provided a prototype of the universal device of immersion to virtual reality of Cyball-VR. Authors of the project – its founder and the head Alexey Abrosov, the physicist, the mathematician, the teacher at MSTU of N.E. Bauman Kirill Morozov, and also the engineer Anton Kozlowski. In more detail about a command and background of the project – according to the link.

The device is capable to transfer physical interaction with objects of virtual reality, the reverse resistance and also state of environment, reported TAdviser in the company. Possibilities of transfer of dynamics of virtual reality are provided with a complex of the systems operating based on motion sensors, provision and acceleration for which work the central control block is responsible.

According to Alexey Abrosov, the project sets as the purpose to give to the user the chance to take active part in all plots of the virtual Universe, without feeling at the same time discomfort or restrictions, and the main mission of Cyball-VR developers see use by the person of all depth of the new world of technical capabilities.


According to statements of developers, Cyball-VR gives the chance to feel the soil under legs, a crunch of snow and a rustle of leaves, whiff of wind and a beam of the sun, to feel objects, their form and weight. 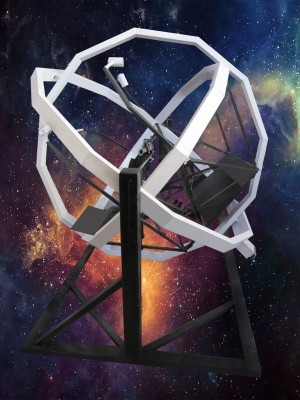 Alexey Abrosov told TAdviser that on development of Cyball-VR from the idea to a working prototype nearly a year left. By the beginning of 2016 the device is in an alpha testing stage. Programs using which the user's provision in virtual reality is defined and it is synchronized with his real situation using engines of Cyball-VR controlling rings are written. In climate control only fans which at acceleration of the user imitate the atmosphere are connected so far. Work on the track set in a system which will not demand existence of special footwear is conducted.

When developing Cyball-VR already ready known servomotors and sensors were used. The program of simulation of flight was written on the "unreal engine 4" engine. All other software was written independently, Alexey Abrosov told TAdviser.

Among scopes of the device – the solution game, sports, for education. One more sphere developers call solutions for disabled people: "Quite often happens that the person for some reason loses capability independently to move, play sports or to play sports. Possibilities of an exoskeleton of Cyball-VR allow to return the forgotten emotions, and in certain cases will give chance to return to normal life".

Alexey Abrosov believes that he will give to people with violation of the Cyball-VR musculoskeletal system (MS) the chance of bigger freedom. He notes that the company does not consider the device as a certain panacea for people with problems of ODS, but knows that many countries, including Russia, are not especially well adapted for them.


One non-profit organization of rehabilitation of disabled people already showed willingness to catch this product as soon as possible, he added.

After placement of information on the device on the website of the company on the Internet questions of the price, a serial product and opportunities of use in the entertaining purposes began to arrive. Abrosov believes that from an exit of the first product to serial, most likely, it is necessary to cover the same distance as Oculus Rift, namely - to be just an attraction: "Many solutions realized began also".

According to Alexey Abrosov, this solution not of the next year, but at sufficient financing its command will be able to show a system in work prior to the beginning of 2017.

Financing of the project

For creation of a prototype of Cyball-VR personal means of project participants and also work of all command in time, free from the main work, were used, Alexey Abrosov told TAdviser. The amount of investments made in the project by the time of its announcement was a little more than 1 million rubles. The project is engaged in research of means for further work for what it prepares a campaign on the crowdsourcing Indiegog platform. In search of the investor hopes for the Russian companies are laid.

Authorship of the project, according to the patent request, belongs to Kirill Morozov, Anton Kozlowski and Alexey Abrosov. The project manager told TAdviser that as of January, 2016 the patent is not taken out yet, but the procedure of determination of inventive level did not reveal existence of the rights for someone to these solutions. In December, 2015 there were documents in Federal Service for Intellectual Property with the request on "the inventive level" on 3 methods.


Prices and geography of sales

At the time of the announcement of Cyball-VR developers determined the cost of a basic system at $6,200, and maximum - at $12,000, the project manager says. Later the price will exchange and in what direction – yet it is not known, Alexey Abrosov in a conversation with TAdviser noted.


Speaking about the planned geography of sales, Abrosov noted that the company will try to cover Russia, Europe and America.