LiveLoop develops tools for joint work of users of Microsoft Office. The first product of the company is LiveLoop for PowerPoint, it represents a plug-in for PowerPoint through which several people at the same time can work with the file of the presentation. At the same time it is not necessary to set additional software and to use services for holding web conferences, like GoToMeeting. LiveLoop is based in San Francisco.

On March 27, 2015 it became known of purchase of Microsoft of LiveLoop company. This developer of software tools for joint work added the list of the acquisitions made by the American corporation for improvement of opportunities of Office.

Announced the concluded bargain of the first the observer of the website ZDNet Mary Jo Foley which repeatedly provided reliable data about not announced events and products of Microsoft. Later the software giant confirmed merger of LiveLoop, but did not set its price. The amount of purchase is also unknown to mass media.[1] 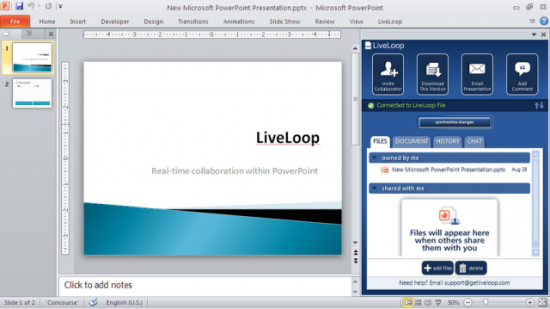 LiveLoop technologies will be integrated into products of Microsoft

The declaration that service will stop work on April 24, 2015 is posted on the website LiveLoop. The reason of closing is not specified.

"Registration of new users and loading of the presentations will be turned off. The acting users of LiveLoop, if you need to take away any data from LiveLoop, please, make it till April 24 as this day all presentations and the user data will be deleted", says a startup.

Microsoft said that the company "is glad to welcome the talented LiveLoop command which will help to create excellent technologies of joint work in Microsoft Office applications". Purchase of LiveLoop is a part of strategy and the concept of Microsoft assuming a new view on productivity of office work, noted in corporation.

LiveLoop technologies will be integrated into products of Microsoft. In particular, they can add Office and services focused on collaboration and the software for the Microsoft Surface Hub tablet.

Earlier for improvement of opportunities of Office the Microsoft company purchased the developer of mail software Acompli and a startup of Sunrise Atelier which is engaged in creation of calendars for smartphones and tablets.