The software for creation of corporate social network.
Owners:
Microsoft

Revenue and profit of the company

Yammer is the designer allowing the companies to create social networks for internal use. Using such tool it is easier for staff of the big companies to get acquainted with each other, to share information and news. The possibility of joint work over projects and other is provided in it. At the same time it is not similar to standard business applications — people can work in the environment, it is more than reminding Facebook.

Since 2010 in Yammer integration into Microsoft SharePoint and also support of some third-party applications appeared.

In February, 2012 Yammer attracted investments for the total amount of $85 million, at the same time capitalization of the company made $500 million.

In June, 2012 Microsoft announced intentions to purchase the Internet Yammer startup for $1.2 billion which works by the principle of corporate social network like Facebook. Using Yammer the private social networks intended for interaction and joint work of employees can be created.

The Microsoft corporation actively to aim to remain relevant to modern Internet technologies what, in particular, the largest purchase in the history of the company made in 2011 testifies to: then for $8.5 billion Skype was purchased.

Besides, in the middle of June, 2012 Microsoft provided the own tablet computer, Surface which should become the competitor of Apple iPad. Surface is expected work on the Windows platform 8 which release is expected in 2012. 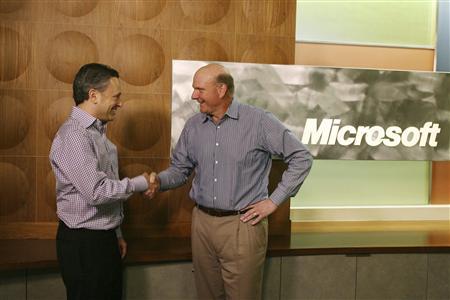 The head of Microsoft Steve Ballmer and the head of Yammer David Saks shook hands each other as a sign of conclusion of an agreement about sale of Internet service for $1.2 billion

According to the CEO of Microsoft Steve Ballmer, Yammer "can become a fundamental part of the Office family". And after purchase of service the same autonomy, as well as Skype will be provided to it approximately: the office Yammer will continue to be based with San Francisco, and its current CEO and the founder David Sacks will remain the head of Yammer. Besides, the Yammer service will continue to provide services in addition to offers of Microsoft.

The planned closing date of this transaction is not called. It is interesting that Microsoft has also a small share in Facebook: the corporation invested in this social network about $240 million in 2007. After sale of $250 million during the IPO of Facebook in 2012, for Microsoft there were about 1.7% of stocks of the company which cost about $840 million.

At the moment users of Yammer are about 5 million registered participants in 200 thousand companies worldwide. As the private company, Yammer does not disclose the total revenue. By estimates of analysts of Nomura Securites it can make from $15 to $20 million in 2011. At the same time the company develops so quickly that a number of industry analysts predicted Yammer exit to the IPO in 2013.

2014: Yammer Enterprise is available to subscribers of Office 365 - educational institutions

On July 21, 2014 the Microsoft company announced opening of access to subscribers of a cloud service of Office 365 for educational institutions to corporate network Yammer Enterprise – to the analog of public social networks which is completely protected according to requirements of corporate security.

Users of all tariff plans Office 365 for educational institutions do not require more acquisition of the licenses Yammer Enterprise when they want to connect external users to the social network.

Organizations of an education system considerably will simplify interaction and information exchange with parents and pupils, without worrying about additional costs.

"New opportunities of interaction with students and teachers which we received thanks to a cloud service of Office 365 are especially important for us as for geographically distributed university: these are fine means of the joint communications and joint work which can be used from any devices, - Vladimir Solovyov, the Chief information officer of Financial University under the Government of the Russian Federation noted. - Yammer Enterprise will allow to provide qualitatively new level of communications and to increase quality of training".

Access to Yammer Enterprise will be got also by subscribers of Office 365 for medium business.

"Support and development of education in our country – one of the major directions for Microsoft in Russia. The company implements more than 25 different initiatives aimed at providing educational institutions with the latest technologies and development of innovations in education. In particular, since 2008 preferential terms on licensing for schools work, the system of continuous training of teachers on use of information technologies in education is developed, the special prices on cloud services of Office 365 which basic functionality educational institutions receive free of charge, and many other things are offered", - Olga Masek, the head of department of promotion of information office systems of Microsoft in Russia emphasized.