JSC Atomenergomash (AEM) is machine-building a division of state corporation on atomic energy Rosatom, the manufacturer of the key equipment for atomic and thermal power engineering specialists, shipbuilding, gas and petrochemical the industry.

About 30 power engineering enterprises, including the research, engineering, production and construction organizations are a part of the company. Considerable part of them is developers and equipment manufacturers, set on all nuclear power plants constructed in the countries of the former USSR and also on a number of foreign nuclear power plants (in Bulgaria, Hungary, the Czech Republic, Slovakia, East Germany, Finland with pressurized water reactors-440 and VVER-1000). Production capacities are located in the territory of Russia, Ukraine, the Czech Republic and Hungary.

The holding proposes to the customer the complete solutions including development of design documentation, production of procurements, the equipment, installation and service maintenance. In nuclear power AEM aims to be the complete supplier of key nodes of the NPP: the nuclear island and the machine hall (in partnership with one of the largest global manufacturers of a utilities equipment – ALSTOM company). The equipment of the enterprises of a division is installed more than in 20 countries, ensuring functioning of 13% of the NPP in the world and 40% of thermal power stations in Russia, the CIS and the Baltic States.

At the end of 2013 Atomenergomash occupied 20% of the domestic market of power plant engineering. 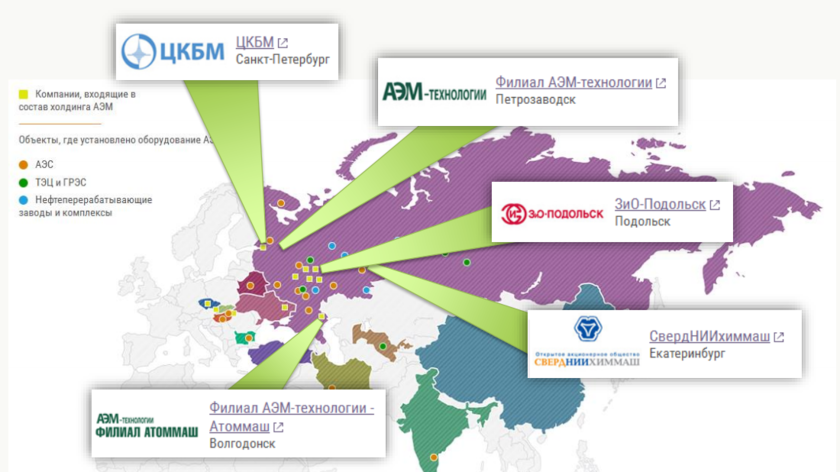 Purposes, tasks and functionality of VRM

From the presentation Saltanov Artem Gennadyevich, JSC Atomenergomash, PhD Econ., the head of management team "What bpm properties are most demanded by risks of JSC Atomenergomash in new conditions?" 2/15/2018 at a conference of CNews

History and indicators of activity

2019: Atomenergomash will invest about 21 billion rubles in development of production base of the enterprises

Investment program of the enterprises of the Machine-building division of Rosatom - JSC Atomenergomash for 2019-2022 will make about 21 billion rubles. In May, 2019 the interview to RIA Novosti news agency were reported about it by the CEO of the company Nikipelov Andrey. Means will go for development of production base of the enterprises participating in production of the equipment of the nuclear island and machine hall for new nuclear power plants of the Russian design. In particular, hardware upgrade, purchase of new machines, the software, development of design and production base will be carried out.

In parallel the enterprises of a division carry out a set of new personnel. Only in Volgodonsk and Petrozavodsk till 2021 it is necessary to employ over 2.5 thousand people. These are welders, milling-machine operators, workers of other specialties.


Also improvement managerial and production processes within system implementation of a production system of Rosatom continues.


The order portfolio of JSC Atomenergomash within construction of the NPP in Russia and abroad contains 17 contracts for complete supply of equipment of the reactor island and as much on machine halls.

Growth of profitability is caused by increase in production efficiency as capital equipment of the NPP, and in not atomic business directions. Implementation of non-core property and assets had an additional positive impact.

"In five years revenue of a division increased more than by one and a half times, and the share of new businesses in revenue grew to 45%. Outside nuclear sector we actively develop presence of the company in the market of the equipment for the LNG plants, we make the capital utilities equipment for the plants on processing of waste in energy, we act as partners in localization in Russia of modern technologies for an oil and gas complex, shipbuilding and power. I thank all our partners for trust and constructive interaction", - the CEO of JSC Atomenergomash Nikipelov Andrey noted.

The order portfolio of AEM in 2018 exceeded 623 billion rubles, having increased in comparison with 2017 almost by 37%.

Growth of profitability is caused by increase in production efficiency as capital equipment of the NPP, and in not atomic business directions. Implementation of non-core property had an additional positive impact therefore more than 500 million rubles were received.

"The geography of our deliveries last year made 27 countries. We participate in all projects of Rosatom in nuclear power and also we provide our development in not atomic markets. Especially I want to note growth of the portfolio of orders for ten years according to the results of a year which made 455 billion rubles. I thank our partners for trust and constructive cooperation. In 2018 timely accomplishment of all contract commitments, increase in production efficiency, increase in volume of export contracts and growth of revenue in all business directions remain strategic priorities for us", - the CEO of JSC Atomenergomash Nikipelov Andrey noted.