2015: From energy of the sun to diesel fuel economy

On December 1, 2015 the press service of JSC Sakhaenergo announced start of three solar power plants in Yakutia. From this date the number of solar stations of JSC Sakhaenergo (as a part of "RAO Energy Systems of East") increased up to 11.

Implementation of technologies on the basis of the concept of renewable energy, the holding sets before itself the purpose - to increase efficiency and reliability of power supply of the isolated settlements of the Far East. 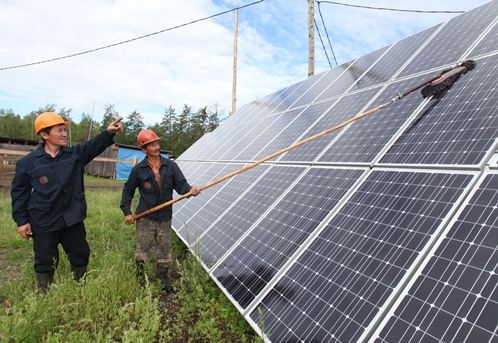 The SES panels in the Verkhoyansk ulus (2015)

Two solar stations are built in the Verkhoyansk ulus: power of a photo-electric array in the settlement of Betenkes - 40 kW, in the village Columns – 10 kW. One more station - in the village of Uluu of the Aldan ulus, its power is 20 kW. SES are synchronized with the diesel power stations operating in settlements and partially substitute development of energy by them. Total installed capacity of all of SES as a part of "RAO Energy Systems of East" for December 1, 2015 – 1.285 MW. According to the estimates of specialists of holding, economy of fuel owing to substitution of development of DES solar power plants in 2016 can reach 408 tons, it ~ 18.4 million rubles.

Construction of SES in the Verkhoyansk ulus - approbation of "a sectional method" of construction by "RAO Energy Systems of East" holding. Columns integrated purchase and delivery of the equipment for the settlement of Betenkes and village with project implementation of the Batagaysky solar station. The first stage of SES with a power of 1 MW, largest in Polar region, opened on June 23, 2015.

Alexey Kaplun, the deputy CEO of RAO ES of the East holding for strategy and investments, told:

- Consolidation of logistics and construction of several stations which are in "bush" allows us to optimize at once capital costs significantly. The experience got in the Verkhoyansk ulus is very important as all our platforms, perspective for implementation of solar generation, are in geographically remote areas of the Far East. Use of "a sectional method" will allow to manage human and material resources more effectively.

The company is going to apply "a sectional method" at construction of stations in the Olyokma, Ust-Yansky, Verkhnekolymsky and Oymyakonsky uluses. The comprehensive program of "RAO Energy Systems of East" on implementation of technologies of renewable power in the Far East assumes construction of 178 solar stations and wind power complexes with a total power about 146 MW. Implementation of this comprehensive program will allow to save more than 30 thousand tons of diesel fuel annually that in a cash equivalent more than 2 billion rubles.